We study a distributed approach to path planning. We focus on holonomic kinematic motion in cluttered 2D areas. The problem consists in defining the precise sequence of roto-translations of a rigid object of arbitrary shape that has to be transported from an initial to a final location through a large, cluttered environment. Our planning system is implemented as a swarm of flying robots that are initially deployed in the environment and take static positions at the ceiling. Each robot is equipped with a camera and only sees a portion of the area below. Each robot acts as a local planner: it calculates the part of the path relative to the area it sees, and exchanges information with its neighbors through a wireless connection. This way, the robot swarm realizes a cooperative distributed calculation of the path. The path is communicated to ground robots, which move the object. We introduce a number of strategies to improve the system's performance in terms of scalability, resource efficiency, and robustness to alignment errors in the robot camera network. We report extensive simulation results that show the validity of our approach, considering a variety of object shapes and environments. We also validated the proposed approach on a set of experiments in a real setup. The holonomic object moving on the ground is implemented through a set of 2 non-holonomic robots, the e-pucks, interconnected by a rigid structure. In this way, they form an object with a relatively large shape, which is able to rotate and move in any direction. The size of the moving area is 33 m2. The multi-robot system on the ceiling is implemented with a set of 4 cameras connected to different computers. Each camera is controlled by an independent process, which cooperates and communicates with the other processes, locally plans the path, and then directs the navigation of the e-puck system through the ground area under its local field of view. The videos below show an example of path planning and movement execution (the camera logo image shows the camera which is currenly in charge to drive the robots). 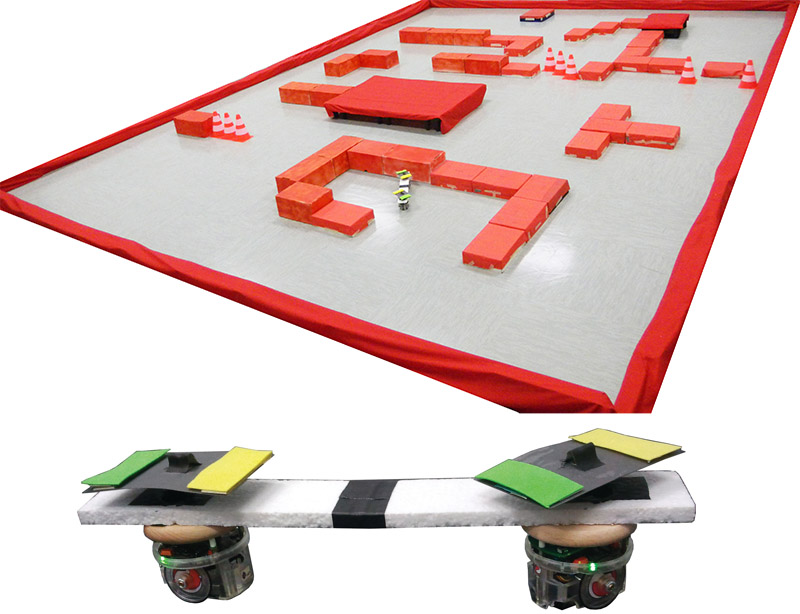